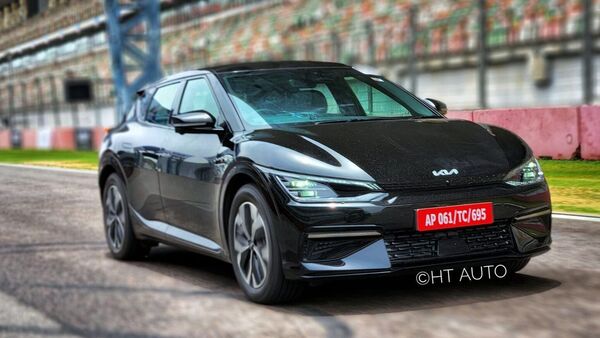 Kia India introduced the new EV6 premium electric crossover in India on Thursday at ₹59.95 lakh (old showroom). The company has now announced that pre-launch bookings for its new electric vehicle have hit the 355 unit mark. And the company plans to start the deliveries of the same by September this year. The new EV6 has been introduced in India in two variants – GT RWD and AWD. It is Kia’s first all-electric model based on its Global Electric Modular Platform (E-GMP). Interestingly, the company has also announced that the EV6 will be available in limited numbers in India. Introduced as a CBU model, only 100 units will be available to customers in the initial batch.

The new EV6 joins the league of other Kia India models such as Seltos, Sonet, Carnival and the previously launched Carens. However, the EV6 remains the most expensive Kia model one can buy in India.

Presented in two variants, the new Kia EV6 is available in both rear-wheel drive and all-wheel-drive versions. While the two models promise different performance, the 77.4 kWh battery at the core remains the same. The EV6 was offered with a WLTP (European standard) certified range of over 500 km, however, the company claims that this range can go even further.

The company also plans to implement 150 kW DC fast chargers in 15 of its dealerships. Thanks to this, the EV6 will be able to recharge from 10% to 80% in about 40 minutes.

The company has communicated in the past that with the EV6 it was aiming to establish a base for electric mobility in India and not really focusing on increasing the numbers.