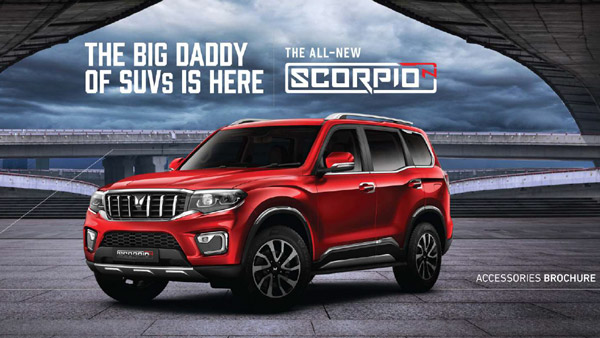 Mahindra also announced that the reservation amount for the Mahindra Scorpio N Suv will be set at Rs 21,000 and reservations will be accepted on a first come, first served basis. However, the delivery date will also depend on the chosen variant.

Since Mahindra Scorpio N is among the most anticipated SUVs in the Indian car market, the demand for the SUV will be high once bookings start in the country. Additionally, reservations for the Mahindra Scorpio N can also be made online and at nearby Mahindra dealerships.

Although Mahindra is well aware of the demand the SUV will generate, Mahindra has also introduced attractive finance programs for the Mahindra Scorpio N SUV. This includes finance offers such as 6.99% interest rate, 100% financing on the price of the road and a duration of up to 10 years.

It is also worth mentioning that customers who have booked the Mahindra Scorpio N can change their choice through the “rebooking change window”. Through this portal, customers can reassess options such as variants and color options. However, customers can ‘change’ their choice until midnight on August 15th.

At present, Mahindra Scorpio N SUV prices start at Rs 11.99 lakh (ex-showroom, India) for the base ‘Z2’ version with petrol engine and manual transmission and go up to Rs 24, 1 lakh (ex-showroom, India) for ‘Z8L’ premium diesel version with automatic gearbox, 4WD system and 6-seat configuration. However, introductory prices will only be available for the first 25,000 customers.

As for the production of 2022 Mahindra Scorpio N SUV, the automaker plans to roll out 20,000 units of Scorpio N SUV by the end of this year. In addition, the deployment of the high-end Z8L “trim” will also be prioritized over other variants. According to Mahindra, deliveries of the Scorpio N SUV will begin on September 26.

In terms of powertrain, the Mahindra Scorpio N 2022 comes with two engine options – a gasoline engine and a diesel engine. However, the diesel engine is available in two tuning states.

The base diesel engine is a 130hp variant of the 2.2-liter turbocharged engine with 300Nm of peak torque. Unlike the more powerful iteration of the same engine, this engine is mated exclusively to a 6-speed manual transmission.

The more powerful diesel engine, meanwhile, produces 172.6 hp of peak power and 370 Nm of peak torque. However, torque output is increased to 400Nm when paired with a 6-speed automatic transmission.

Finally, the 2.0-litre turbocharged petrol engine produces a whopping 200 peak hp and 370 Nm of torque, but torque increases by a further 10mm when mated to a 6-speed automatic transmission.

Mahindra has high hopes for the Scorpio N SUV and the SUV has already gained a lot of traction among SUV enthusiasts and potential SUV buyers. We hope Mahindra will be able to meet the demand for SUVs.

Have people forgotten how to be good travelers during COVID? | Travel convenience…