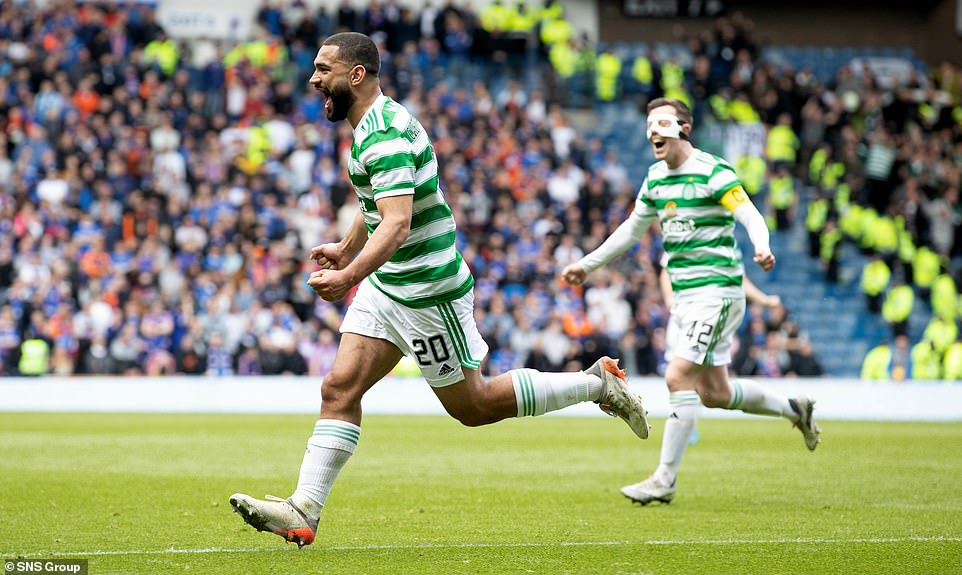 Rangers 1-2 Celtic: Visitors come from behind to take a six-point lead at the top of the league

Celtic opened up a significant six-point gap over Rangers at the top of the Premiership with a 2-1 win at Ibrox.

On loan Gers midfielder Aaron Ramsey scored just three minutes into his opener against Old Firm with a finish from close range, but Hoops midfielder Tom Rogic equalized four minutes later and defender Cameron Carter-Vickers thrilled the 700 traveling fans when he fired. the visitors lead just before the break with a goal that proves to be decisive.

With six matches remaining, including another Old Firm game at Parkhead – as well as a Scottish Cup semi-final between the two Glasgow giants – Ange Postecoglou’s side are on course to bring the title back to across town, aided by a goal difference advantage of 16.

Giovanni van Bronckhorst’s men face Braga in the first leg of their Europa League quarter-final in Portugal on Thursday – their boss Carlos Carvalhal watched from the stands – but their domestic aspirations have suffered a blow at the hands of their bitter rivals.

The home side had been hit with a major injury in the build-up to the long-awaited meeting in Govan.

Colombian striker and Gers top scorer Alfredo Morelos was ruled out with a muscle problem and he was replaced by Kemar Roofe, while Ramsey replaced Glen Kamara.

Postecoglou had promised to pull out all the stops for the win but the Light Blues came out of the traps and Ramsey opened the scoring in the third minute when he punched in a cross from Ryan Kent after the width was crossed by the defender Calvin Bassey.

Govan’s side drove for number two and some dangerous deliveries came through Celtic’s goalmouth.

However, in the seventh minute after Gers goalkeeper Allan McGregor parried a 25-yard drive from Reo Hatate, fellow Parkhead midfielder Rogic – who had ignored a shot to play – sent the ball high into the net .

Celtic started to dominate and Rogic ended a quick move in the 25th minute with a shot above 16 yards.

In the 33rd minute, Rangers midfielder Joe Aribo fell in the penalty area under pressure from defender Carl Starfelt as he moved in for a cross from James Tavernier, but referee Willie Collum ignored requests noisy penalties.

At the other end, McGregor thwarted Daizen Maeda as the Japanese striker tried to round the keeper in the box and Rogic’s follow-up shot from the loose ball hit Bassey with the danger finally over. Moments later, Celtic striker Giorgos Giakoumakis headed a Jota cross past the post.

The start of the second half was delayed as Joe Hart reported shards of broken glass inside his penalty area as he came onto the pitch.

McGregor raced to block Maeda – this time Celtic appealed for a penalty – but a Hoops goal was on the cards and three minutes from the break, when Rangers failed to clear Jota’s free-kick from wide on the left, Carter-Vickers turned and drilled a left-footed shot low into the net.

The start of the second half was delayed as pitch staff removed the glass of a broken bottle from Celtic’s goal mouth, but when play started the Light Blues tried to reassert themselves.

There was another penalty call from Rangers when Ryan Jack’s cross hit Carter-Vickers, but again play continued.

Matt O’Riley and Nir Bitton replaced Rogic and Hatate in Celtic midfield while Ramsey and Jack made way for Fashion Sakala and Scott Arfield as tempers began to crumble.

Rangers capitalized on a period of pressure and in the 75th minute Celtic goalkeeper Joe Hart made a good save from a Sakala shot.

Moments later, Celtic substitute Liel Abada, in place of Jota, missed a great chance offered by Giakoumakis when he missed the target from 10 yards out. McGregor then swung another effort from Abada over the bar.

Rangers came back and Roofe turned a Connor Goldson cross over the bar, but in the end Celtic held on for the win which could prove critical.

It was Ange Postecoglou’s most important win since taking over as Celtic manager ten months ago.