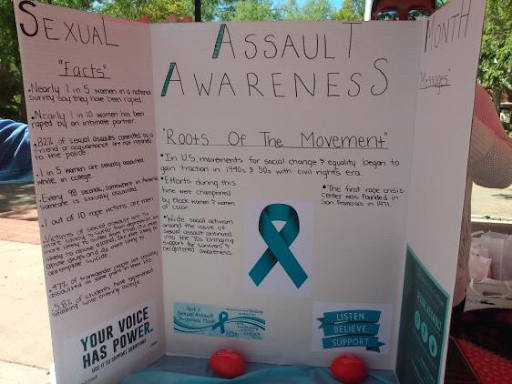 On April 5, an event was held in the main fountain area called Chalk-It-Out, where students were encouraged to draw, write quotes, and express their feelings.

Students were curious about the booth, interacting by drawing, talking or taking free goods provided. Many have asked about sexual assault statistics and many have been surprised that men can be assaulted as well.

For Sexual Assault Awareness Month, two more events will be organized to support its survivors.

On April 21 from 12:00 p.m. to 2:00 p.m. in the free speech zone is held the event The Bandana Project, which is a public awareness campaign aimed at addressing the problem of sexual violence in the workplace against female agricultural workers in the United States.

An artistic approach will be used in which white bandanas will be distributed to be colored or give motivational statements to support survivors.

The final event to end Sexual Assault Awareness Month is April 28, from noon to 2 p.m. near the main fountain east jeans day, where students and staff can join the movement by wearing denim. This project aims to show that it is not the fault of the survivors for the assault.

Students will be encouraged to take photos with photo frames and props to commemorate survivors and the sexual assault awareness movement.