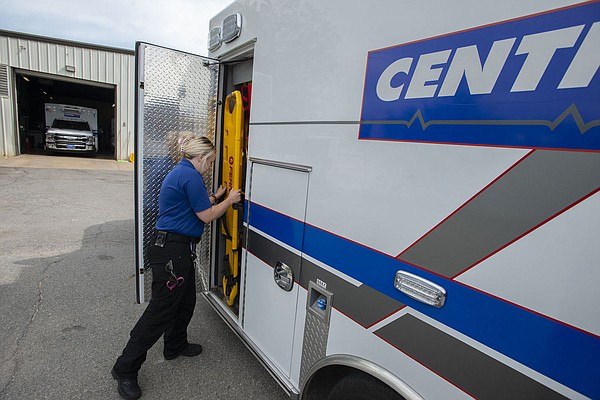 FAYETTEVILLE — Caught between rising costs and falling revenues, Central Emergency Medical Services is asking local governments for more than $1 million to help the agency through the end of the year.

The Washington County Regional Ambulance Authority’s board of directors, which oversees the operation of central emergency medical services, voted Aug. 3 to ask authority members to provide $1,043,178 in additional funding. The total is split among members, with Washington County being asked to provide $545,140 and Fayetteville being asked to provide $357,454. The other cities’ share of the requested funding ranges from $28,655 for Farmington to $1,750 for Winslow. Springdale provides its own ambulance service.

Fayetteville Fire Chief Brad Hardin serves on the executive committee of the authority’s board of directors. He submitted the request for additional money to the Fayetteville City Council where it will be on the consent agenda for the Sept. 6 meeting.

Hardin said ambulance services across the country are experiencing the same issues as CEMS.

“Ambulance services across the United States are in trouble,” Hardin wrote in his memo to the city. “Collection rates are falling. The amount paid by Medicare and insurance companies continues to fall. The federal government recognizes the problem and is working on an ambulance service assistance program. The supplement estimate for WCRAA is nearly $1 million. Unfortunately, they predict that the first payout will not occur until July 2023, originally scheduled for July 2022. Besides the drop, WCRAA has seen unprecedented price increases for supplies, equipment, materials and ambulances Their monthly fuel bill has gone from $19,000 to $43,000 more expensive, they, like everyone else, have trouble recruiting and retaining. requires significantly more overtime than would normally be required.For these reasons, WCRAA is facing a deficit of $1,043,178 this year.

Steve Harrison, head of CEMS, said the service has an annual budget of about $15 million, with the bulk of revenue coming from Medicare payments, private insurance and individuals who use the service. Harrison said income from all of those sources has declined with changes in Medicare and Medicaid and private insurance reimbursement rates and with an increase in the number of people struggling to pay for the service on their own.

Harrison said the covid pandemic had contributed to the problem, as had the recent spike in inflation and supply chain issues.

Harrison said the service had “relief funds” in reserve, but that began to dwindle in 2020 and 2021. As the pandemic continued, he said, the service also began to see a higher turnover among its 125 employees, which in turn increased costs. through overtime. He said the ambulance service responds to between 450 and 500 calls a week.

“Our normal turnover rate for a year was around 10%,” he said. “Last year it was about 24%. People are getting burnt out. They’re tired of covid. They’re tired of working overtime. Some of them have gone to other areas of the healthcare or emergency services where they have more We are a 24/7 service, 365 days a year They respond to all 911 calls.”

Harrison said the cost of medical supplies has increased from 40% to 65%. The recent increase in fuel prices has also hit the service hard.

Washington County did not put the funding request on the agenda of a court quorum or full body committee. Patrick Deakins, justice of the peace for District 5 and chair of the finance and budget committee, said he had spoken with members of the ambulance board and with CEMS, but had not seen the detailed request. Deakins said the Court of Quorum approved about $1.1 million for new ambulances and equipment for CEMS in December and another large request will require discussion.

“This is another one of those great conversations that we’re going to have,” Deakins said.

In Benton County, the county is looking for new ambulance service providers after Northwest Health notified the county in early August that it would be ending its contracts with the county to provide ambulance service in western Benton County. County Judge Barry Moehring said the contract with Northwest Health will end in January 2023 and the county has begun researching other providers, announcing a request for qualifications for the service. Moehring said the deadline to respond to the request for qualifications ends Sept. 6, and the county will see what its options are at that time.

“We’re just in a waiting pattern until then,” Moehring said.

Sami Hoffman, an emergency medical technician for the Central Emergency Medical Service, packs equipment into an ambulance on Thursday. Central EMS is asking local governments to help keep the operation financially afloat. Delayed reimbursement from individuals and health insurers and insurance companies as well as inflation are among the reasons cited. Visit nwaonline.com/2200904Daily/ for today’s photo gallery. (NWA Democrat-Gazette/JT Wampler)

The Washington County Regional Ambulance Authority is an interlocal governmental authority in Arkansas formed under Arkansas law to authorize cities and counties to enter into interlocal contracts to provide services such as emergency ambulance services and not urgent. The interlocal agreement covers ambulance service by and with Fayetteville, Washington County, Elkins, Farmington, Goshen, Greenland, Lincoln, Prairie Grove, West Fork, Winslow and Johnson. It also establishes the Ambulance Authority and Central Emergency Medical Services as the exclusive emergency and non-emergency ambulance service in cities.